This post has been a long time in writing and so is probably one of my longest to date.  Mostly because this is a subject that hits very closely for me. I actually wanted to start writing this back in 2012 when a story was released on MSNBC about a woman who was on Facebook and ended up forgiving her bullies because of the conversations.  I would link it but apparently MSN doesn't keep news articles that long.

The topic of bullying has has been very popular in the past few years and I can honestly say that I understand some of the victims feelings. Some, but not all. As a child/pre-teen I suffered through a great deal of bullying. So much so that I spent the last year of my grade school education finding a different way home from school each day to avoid getting my butt kicked by kids that were mocking me.  I avoided catechism classes because I would have to venture back into their territory, and even share the class with some of those bullies so I found ways to avoid attending that as well. I begged my father to take me out of school so I didn't have to suffer the abuse. He really didn't understand what I was going through and so told me I had to stay in school. Period, end of story. Not that there were really any other options in the late 70's and early 80's anyway.

For me, the worst part was that the abuse wasn't just physical but also verbal and mental. If I wasn't getting beat up I was getting called names and being threatened on a very regular basis.  For a young boy who was just starting to find to his place in the world this was a horrible experience.  Don't get me wrong, I had friends and had a great time, but I hated going to school. I loved school itself, but hated the going to and coming from school as well as the abuse I faced from other students.

One that stands out for me was shortly after my father and I returned from Japan. He was in the military and we had been stationed over there for 30 months. Since my parents had divorce not long before he was reassigned oversees and he had custody of me but not my sisters, I had a great time with just my father and I.  However, when I returned I was called all kinds of slurs, many of them not making any sense at all, such as Chink. Trying to logically explain that I wasn't Asian didn't help, and if anything only encouraged them. I was not allowed into any of the cliques or to hangout with anybody there because I wasn't acceptable.

My escape was books. I read a LOT of books. So many that I won awards for reading books. But to be honest that really didn't help me because I still heard the voices of those attackers and had to learn to deal with the pain it caused. My way of dealing with it was to bury it deal inside. After many years I tried adopting "I feel no emotions" type of approach. That only made it worse when the emotions finally filled up the jar in me and started flowing over.

Don't get me wrong, I did have friends around the apartment complex where we lived, but there weren't in the same grade I was in so I didn't get to see them at school. Those friends were great and I had a great time hanging out with them. I don't think any of them ever realized what I was going through though.

I don't have a solution for how I could have been helped back then, other than maybe being put into counseling to help me work through the feelings and how I can get through that season of my life.

Funny enough, probably the biggest breakthrough for me came 3 years later when we had moved to Germany. Very shortly after I started school I was verbally attacked by another student on the bus. He was very determined to abuse me verbally and finally tried to fight me. He stated in no uncertain terms that we were going to be fighting when we got off the bus. When we got off the bus I tried to walk away but he was going to have none of that and got in my way to prevent me from walking away. I faced off against him and when he took his first shot he bloodied my nose. Unfortunately for him, I actually have a fairly high pain threshold so he hit me and I looked at him and asked him if that was all he had. The fight was quickly broken up by an adult who saw us from their balcony so he didn't get another shot, but I had learned that I could face these guys down instead of taking the abuse. No longer did I have to take the verbal and mental abuse. No longer did I have to cower when they attacked me. I didn't become someone who looked for fights, but I didn't have a problem if a fight came a calling.

That level of confidence helped me begin to repair myself and start relating to others. I still didn't have a solid confident self-image, but I was doing better than before. Fast forward to today and I can safely say that I am much better than I was then, but I still don't like big crowds by myself or situations where I am not in complete control. I am still working on my attitude and self-image, but I know who I am, the strengths I have, and in whom I trust.

For those who are being bullied I can only tell you that you do not have to keep to this yourself. You CAN'T keep this to yourself. To try and bottle it up inside will only hurt you more and enable your abuser to be empowered to abuse others. Stand up for yourself and if you can't do it, get help doing so. Others have no right to abuse you and you do not have to accept the abuse either. Seek out help with dealing with the issues, including help with your mental state as well. You are a valuable person and although you may not realize it you are of great worth to others regardless of what your abusers say to you.

This is the end of Part 1. Part 2 will be released soon.
Posted by Malikont at 12:30 AM No comments:

Huh, I was looking at my dashboard for Blogger and realized that it has been a full 25 months since my last post and a lot has happened.

Several trips to visit friends in Montana, two changes in position at my job, my Mother-in-law moving in with us, and so much more. All things that I could have posted about but none that I did post.
I have had many ideas for posts and I think it is about time I followed through on those ideas.
The first up will be a series of posts written specifically to my nieces and nephews, but can easily be for any one else as well.

I will try to get the first in the series out by the end of this week, but we will see how this goes as I also have a major gaming event I am volunteering for this week as well.

In the meantime, please enjoy this picture of my niece when she was just a little pipsqueak. I was wearing my Scott EVest and it had a big pocket on the back that she fit in just perfectly. Such a cute. If only she hadn't turned into a such a cute teenager. Now her momma has to deal with all them boys.
Thank fully they both have brains as well as looks. ;) 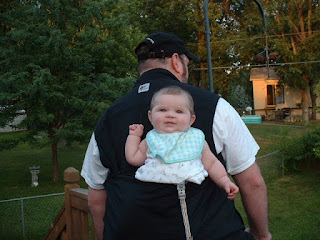 Posted by Malikont at 2:16 PM No comments: