Who let Pluto out?

I have posted quite a few pictures of people leaving doors open that are marked that they must remain closed, but I really didn't expect to run into one while wandering around at Downtown Disney recently. 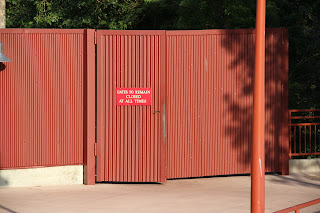 As I was walking up the bridge from Downtown Disney West to Pleasure Island I looked over toward Planet Hollywood (just makes you wish you could rattle these off so easily doesn't it? Me too.) and I noticed that this gate was open a little. The next thing I noticed was not only was the gate open but there was a very obvious sign ON the gate that plainly told people that the gate was not to be left open.

Did you peek behind the gate?

And ruin the magic? This gate was actually below where I could reach so I had no access to the gate itself.