Rise of the Guardians - Review

I went to the movies this weekend.  We (Mrs. T and I) were invited to join my sister and my niece (you remember her, the genius soccer star) to catch a matinee showing of DreamWorks's Rise of the Guardians. 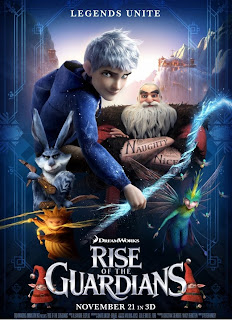 I went in expecting a Christmas movie since anything I have seen for the movie seemed to be focused on Santa Claus (Alec Baldwin) .  However, the key character is actually Jack Frost (Chris Pine) who is suddenly promoted to the level of Guardian to help protect the world's children from Pitch Black (Jude Law).  The press release tells the basics:

DreamWorks Animation’s Rise of the Guardians is an epic adventure that tells the story of a group of heroes — each with extraordinary abilities. When an evil spirit known as Pitch lays down the gauntlet to take over the world, the immortal Guardians must join forces for the first time to protect the hopes, beliefs and imagination of children all over the world.
However the story is so much more.  At one point the Easter Bunny (Hugh Jackman) explains that Easter is about hope, renewal, and a rebirth.  A point that is very close to the truth, without offending the non-Christians.
Based on a book by the Oscar winning screenwriter William Joyce, this is a story about childhood faith in the legends that we were taught by our parents.  This is a story about believing.  Although it is chock full of legendary characters like the Tooth Fairy (Isla Fischer) and the Sandman as well, it reminds us that child like faith is what we need to keep alive through out our lives.  Without that faith, regardless of your beliefs, your life can become filled with fear and resentment.
This was one of those amazing movies that never seemed to hit a flat point. It was always keeping you going and it brought you along in the emotions of the moment throughout the entire movie.  This is a rare gem that I hope wins a lot of awards.  It has earned them.
--TT
Posted by Malikont at 12:00 AM