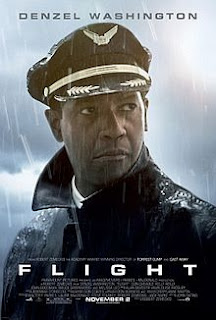 I recently went to the movies with my sister to see Flight.  I was expecting an exciting movie, but not really sure what the story was about other than a plane crash.

The opening scene is filled with full nudity, alcohol, and drugs.  The scenes with the aircraft are very dramatic and have you on the edge of your seat. Everything after that is filled with cursing and runs flat.

The story is not that compelling after the crash.  It centers on Captain Whip Whitaker and his inability to get past his own failing, which he denies exist.  However, there are some hilarious scenes as well, primarily when John Goodman is involved.  Interesting note that I made while watching was that every time there was a change in act, there was a thunderstorm.  It was a subtle indicator, but one that was rather appropriate for the turbulence in his life.

I am not going to spoil it for anyone, but the best parts of the movie were the crash and the two ending scenes.  Both of which I don't think you will expect.

Am I going to say that this was a horrible movie?  No.  But I will say that it really wasn't what I expected, and it was just average.