Sundown in the Keys

Many people dream of spending a vacation in the Florida Keys.  Personally this has never been a dream, but I would like to say I have been there sometime.

With my recent work for a client in Miami I had the chance to fly in early one day and actually drive down to Key Largo.  It is about a 90 minute drive south of Miami and is a rather pretty beautiful drive as well.  Most interesting is teh fact that for a majority of the drive you are stuck in a corridor defined by fences and concrete dividers.  I would imagine that the fences are there to protect the gators in the Everglades from the fast moving cars. ;) 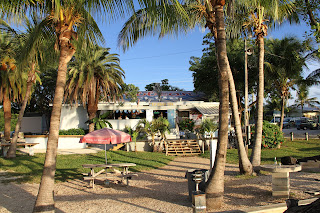 Once I arrived in Key Largo, the first of the chain of islands in the Florida Keys, I had to find a place to stop and take pictures of the sunset.  I actually stopped at the Carribean Club, site of the famous movie Key Largo.  There are even statues of Bogie and Bacall in the club. It is an fairly open air place that was extremely relaxed and comfortable, even for someone like me.  It stood right at the beach and they were fine with you stopping to watch the sun go down.

Of course I had to take part in that long time tradition of imbibing a cold one while the sun worked it's way toward the horizon.  Some how sitting out on a picnic table while the sun goes down, your toes are in the sand, and there is a cold beer in your hand just make everything better.  The world just seems to step back and let you be for one long minute.  Nothing could intrude on this moment, not even the guys backing their diesel truck down the boat ramp to load their boat up at the end of a long day of fishing.

Looking around I noticed an out cropping that was reflecting so clearly in the water that you could almost swear that it was another in the water. A boat was anchored off in the distance looking equally as peaceful as the water was inviting.  The birds even left me alone to enjoy this moment of rightness.  Suddenly I could just imagine myself living here and not having a care in the world. 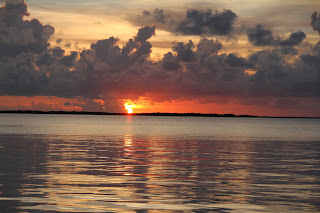 Sadly this also marked the point where I needed to head back north so that I could prepare for a new day in which I would again return to my profession and help another customer with their problems.

But I will never forget that one evening on a beach with a beer and the sunset.

Nicely written. And I stole you outcrop shot!