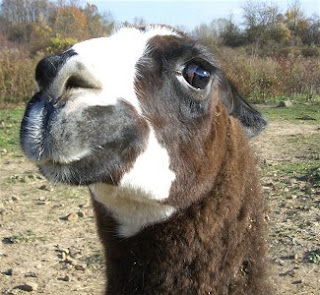 And now we have made the Llama sad.

Bit of trivia for you, a lot of the pictures on this blog are taken with a Canon 7D.  This same camera is actually used to film many of the TV shows that you watch these day.

As I was browsing the web this week I stumbled upon this great video that was recorded using Canon cameras.  It is a story of action in World War II that I am sure didn't happen, but not for the reason you think.  The twist in the film is what makes this that much more entertaining.


For even more information on the video, watch Behind the scenes video below.  Very informative. 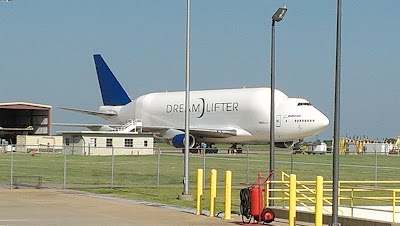 I have been working in Wichita lately and one day I decided to go for a drive around McConnell Air Force Base, near where my client is located.  As I came around on the west side of the airfield, I went through the Boeing section of the area.  I was looking around at everything that was there and suddenly I see this strange looking massive aircraft parked on the revetment.  I just had to stop and look at this closer.

This is the Boeing 7E7 Dreamlifter. As you look at this photo keep in mind that this is a modified 747 designed to carry parts for the 787 Dreamliner. This thing is HUGE! Only 4 are built and they are no longer in service.  This think can airlift a maximum of 405,000 pounds of cargo, loaded on the worlds longest cargo ramp though the swing tail cargo door,  and has a range of 4800 miles while cruising at a max speed of 545 mph. 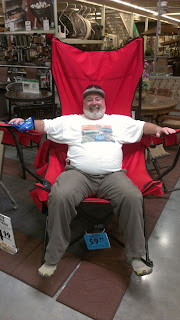 I was shopping for parts for some work in the office at the local home improvement store and as I was looking around I ran into the perfect chair for me.  It has 6 cup holders, and plenty of leg room.  Although there may be a few people that might take umbrage with the 6 foot + height on this thing.  But I love that my feet don't touch when I sit in it, and it is really rather comfortable.


Although this does remind me of a Lily Tomlin skit.

I was working with a client in Miami last week and one morning it poured during the commute.  It seems that  Miami had a small problem with drainage if it rains more than a sprinkle.  The intersections become shallow lakes and the streets running streams. But it also brings a wonderful fresh scent to the air and a cooling temperature as well.

I drove all of 5 minutes in this and as I sat down in the cubical assigned to me I unpacked all my gear and settled in for another day of pushing bits around the network.  I looked up and there was a site to behold that drew all of us to the windows. 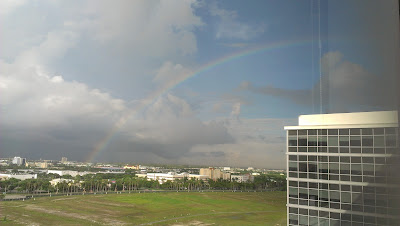 A rainbow!  The rain had left and with the sun coming out we were not being treated to a rainbow.  Not only a single rainbow, but there was also a very faint second rainbow on the outside of the first.

All the water we just drove in through is quickly forgotten when that arc of color is displayed.

One of my favorite memories of that trip.

What a Great Attitude! 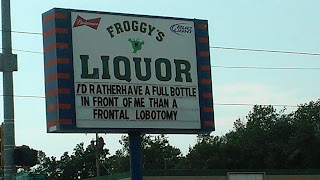 Stopped at a traffic light a few weeks ago I saw this sign and thought that they had the best attitude.  Somehow I think I would rather have my bottle of adult beverage full than have some sink a probe into my head and spin.  Heck, I think I would even settle for an EMPTY bottle than the probe. 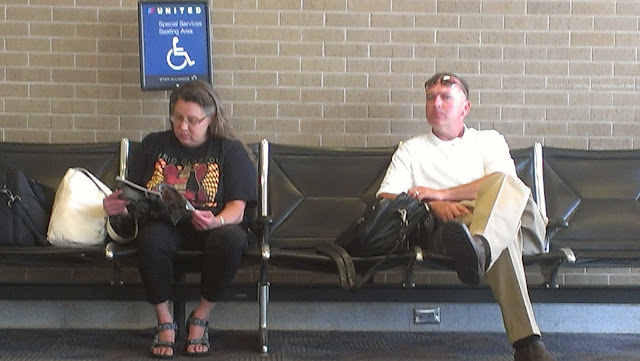 This picture is from the airport. As you look at the picture above I hope that you will see the same irony that I do.  In case you don't see it, there are two perfectly able bodied human beings on that bench.  Behind the bench is a sign that states that the area is for the handicapped travelers.  It should be noted that I took this from my seat surrounded by lots of empty seats, and those particular seats in the picture are the closest to the gate

Sadly, I see this all the time, and I am puzzled by why people feel they are so entitled to sitting close the gate that they will sit down and take up space in an area clearly marked for those who truly need to be closer because of their disability.

I have to wonder what causes someone tho act this way.  Is this because they can't read, or is it because they feel so entitled that they will sit there anyway?

This Could Be You! 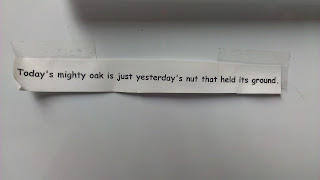 I was sitting a in customers cube the other day and I noticed that he had a little piece of paper taped to his cube wall.  As I read this I thought bout how true this really is when applied to any person that is successful.

Any one who really wants to make a difference for themselves in this world must make a determination to be different from the rest of the world and stick to their plans for their future.

I am not where I want to be, but I am on the way, and I am definitely a nut in the past and now.

Maybe someday I will be an oak.

The other day I was visiting Winestyles and I noticed this case of wine.  How could I not? 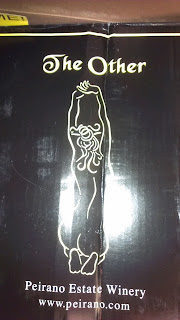 This is supposed to be a delicious red wine with the following tasting notes:
One is immediately struck by the vibrant color of this wine. The aromas of blackberries and plums are complemented by spice, toasty oak and cedar notes. Upon washing this liquid across the palate, a wave of sweet black cherries and boysenberries, with a hint of smoky, dark oak lead to a long, totally seductive, finish.  A great expression of this variety, this wine will gently knock your socks off.  ‘The Other’ is a perfect accompaniment to a variety of cuisine.

All I know is that the label is eye catching.

Email ThisBlogThis!Share to TwitterShare to FacebookShare to Pinterest
Labels: label, red wine, The Other, wine, WineStyles

Is It Automatic or Not? 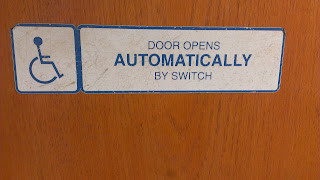 To keep with the recent theme of bathrooms (it's not that I am fixated on them, they are just easy targets that everyone must visit sooner or later), let me present you a sign I saw on a door to the men's room at a client site.

I read this and instantly had to ask myself, "If it's automatic why do I have to press the button?"  That seems fairly straight forward don't you think?

Another note on this sign.  I was working onsite with another member of the team and after I took the picture and returned to the cubical he looked at me with a smirk on his face and said "You just took a picture of the sign on the bathroom door didn't you?  I saw that earlier and thought to myself that if he sees this it will be going on his blog.  Am I right?"

I quickly reminded him that nobody likes a wiseguy except the wiseguy.

And then I proved him right.  :D

The History of Rock 'n Roll

A little late this morning with the post, but this was worth it.  I stumbled across this video on the 'Net that was worth every effort to post and it also means a change of pace for the blog today.  Normally I post pictures I took but this time I will try linking a video.

This particular video is put out by the Chicago Music Exchange, and features Alex Chadwick from 100Riffs.com playing 100 different "riffs" from famous songs through the histroy of Rock and Roll all in a single take.


Most of these I recognized and jammed with.  It really struck me that there were so many I recognized without reading the guide in the lower right corner for help.


By the way, this was all recorded on a Nikon DSLR camera not a video camera. 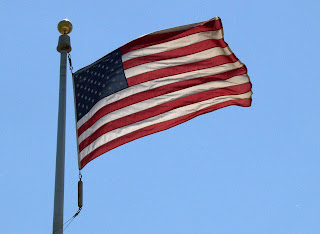 Today is the day of picnics, family and fireworks.  At least here in the US.  I have friends in Austrailia who just call this Wednesday, and our excuse to party.  Since that really does seem to be what today has become in the US, I really can't argue with them.


But then I have to wonder, maybe not everyone is celebrating a day off in the middle of the week.  Maybe some people actually are celebrating the 236th birthday of this nation.


In that 236 years a lot has happened:
1) Nations have fallen
2) 2 world wars have occurred
3) 5 territories have been added
4) 37 states have been added
5) The population has grown by 313.5M
6) The flag has added a few stars (37 to be exact)
7) Travel has gone from the horse and buggy to planes, trains, automobiles, and rocketships
8) Communicate has gone from hand written mail to electronic mail, texting, the Internet, radios, and e-books.
9) Appliances have gone from the fireplace and ice in a cave to stoves that talk and refrigerators that can tell you the temperature inside them.  Heating has gone from throwing another log on the fire to programming the thermostat for the desired temp no matter what the temp is outside.
10) Schools went from 1 room to 2200 acres. 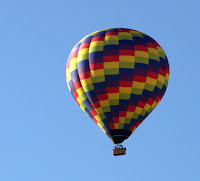 The same trip as the previous bottle post I also had another exciting event.

As I was driving from the hotel to the workplace I noticed 3 balloons off in the distance that seemed to be rather low.  The closer I drove to the client site, the more I could see that the balloons were also near the client site.  They were also coming down at the same time. 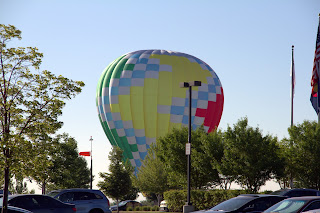 By the time I had come to the client's location and turned off the highway to their parking lot this light colored balloon was coming down in the grass less than 100 yards from me.  Since I was driving at the time I didn't want to risk taking a picture and handling the traffic so this picture was taken after the car was safely parked in the parking lot and I could get the camera out without harm to myself or others.  As you can see the balloon was rather close to me where I parked, but I had just driven in near where is it sitting in this picture.

But this is only 2 of the three balloons.  I had lost track of the third balloon because it had come down somewhere on the other side of the building.  A quick check of the time told me that I just didn't have time to go look for it since I actually was there to work not ogle balloons. 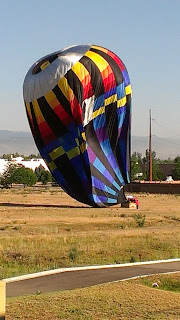 After checking in at the front desk and getting my badge I headed back to the back of the building to check in with customer.  As I am turning the corner into his row what should I see but the third balloon is setting down in the field right outside!

I quickly grabbed the customer to show him and he suggested that we should go outside instead of trying take pictures through the blinds.  We headed out the side door and right there in the field in front of us they were deflating the hot air balloon.  I was quickly informed that they are probably going to be very upset with themselves later as that field is covered in yucca and cactus.

This was a rather uplifting event for me.  Anything cool like this happen to you?