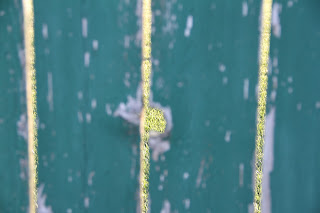 At one time baseball games were played on lush green fields of grass and dirt, and people paid good money to see those games.  Well, not all of them paid, some of them would find their way to the wooden plank fences that kept them out of the fields.  But they weren't there to climb, they were there to peek through the knotholes and watch the game as long as possible.  Sooner or later they would be chased off by security but until then they would be able to watch the game from their own private view.

These days the walls are taller and much more solid than before, and the games are much more expensive.  But this knothole still looks onto the field and the history is still there.

This is a good one. What made you think of it?

I was walking by the fence on the way back to the car and saw the knothole. That was enough to take the picture and go with it. I wish the knothole had been high enough for me to get a better picture through it, but this will have to do for now. ;)