This time of year all the sports fanatics go crazy with prognostication and statistics compiling.  They burn through tons of chips, gallons of beer, and massive hours of TV.  All this because the college basketball playoffs have begun. 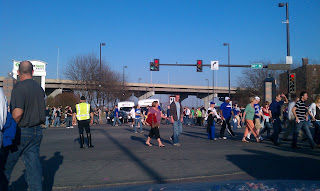 Normally I would try to find a hole and pretend that its not going to be as bad as previous years.  But this year, fate was grinning at what she had in store for me.  You see, this year the NCAA had decided to once again hold some of the games in Omaha.  That is not that bad since I am on the opposite side of town, but I forgot about the games and made plans to attend a mystery theater dinner at a restaurant that night.  Unfortunately, that restaurant is directly BEHIND the CenturyLink Center where the games were taking place.  Even worse, there are only two ways into the restaurant, one that requires that I loop around town to the far north or the one that takes me through the downtown section near the Center. 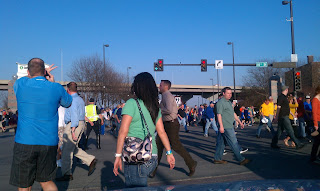 Because I forgot all about the games being in town I choose the downtown route since it saves me about 20 minutes drive time.  At least it did until I hit the area by the Center.  Once there I ran into the pedestrian traffic and the party district.  There are several bars in the district, and they were packed to overflowing with revelers, and the foot traffic to and from the Center was beyond belief.  As you can see from the pictures in this post the people were just walking across the intersection we were sitting at in any direction they wish.  The police were in place to direct traffic and the pedestrian traffic seemed to be fairly well behaved.  I only needed to get past the traffic lights you see in the picture, but it took us almost 10 minutes to do so because the combined traffic was just so incredible.

So much for staying out of the way.