Here in Nebraska (did I mention I live in Nebraska?) we have been fairly warm and free of most winter weather, until this last weekend.  We were hit with a snow storm that dropped as much as 12 inches of very wet snow on the state.  Various areas lost power and there was even a building that collapsed due to the weight of the snow. 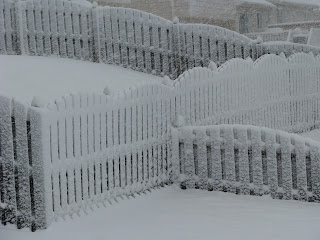 Personally, I holed in the house and enjoyed a nice warm fire while watching movies and TV with my lovely wife.  I did take a few pictures during the storm of our backyard and you can see that it was a beautiful site.  The wind was blowing out of the north and the world looked like a Christmas tree flocking machine had gone crazy and plastered the world with a layer of the white stuff. 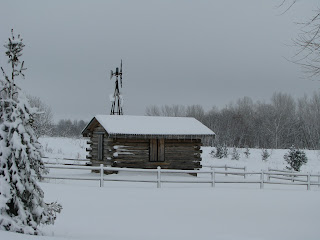 After the storm we ventured out to a park and started taking pictures of all the natural art work we saw.  One area has a old fashioned cabin with a windmill and the snow created a picture that just seemed to be straight out of the past.  We thought about walking over to the cabin, but it just didn't seem right to disturb the scene with our footprints. 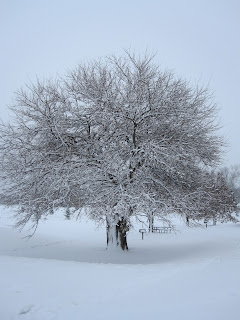 Needless to say, the trees were covered in snow, and that snow created intricate patterns on the branches.  A lot of the time it seemed that the world had lost all it's color thanks to the gray sky and all the snow, but that just seemed to make the trees that much more amazing. 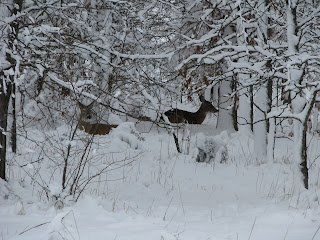 As we were driving to another area in the park we passed an wooded area that was getting all the drivers to slow to a stop. We had to stop as well when we realized that the deer had bedded down in the trees and they were watching the vehicles drive by with as much curiosity as we had about them. 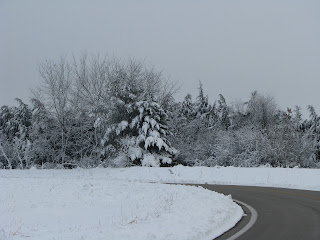 This last photo is a composition that I setup when we stopped to look at field. I like the way the road wraps around into the picture and how the trees have so many various textures.

Enjoy the winter weather, we will soon be complaining about the heat and humidity.

like the article and the accompaning photos. the text in between the pictures was a challenge to read. The deer picture might be a nice calender picture...hint, hint.

thank for the compliment. As for the text issue, sometimes the editor doesn't represent the post as it will be and the preview will do the same. I have fixed it however. Thanks again.