I recently went on a in vacation in Cancun, Mexico. This was a vacation that I have been looking forward to for a very long time, and that wait was worth it.

We arrived late in the afternoon and stayed up late the first day so we slept in and tried to recover from the travel.  However, the second day, Saturday, I arose early and went down to the beach to get a picture of the sunrise.  Somehow there is just something magical about the start of a new day and I wanted to experience without a city to interfere. 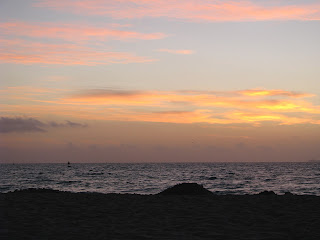 As I walked onto the beach the sky was already on fire with reflected sunlight and the glow of the potential for a new day. As I looked around I found that I was not the only person to come and enjoy the early morning at the beach.  There were people running in the stretch of sand where water and sand merge to form a surface somewhere between.  There were people out performing yoga to warm up for their day.  There was a couple out having their wedding pictures taken in the early morning light.  There were a few who actually wanted to swim this early in the morning. 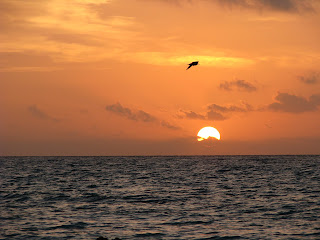 But as I sat with a friend who was on the vacation trip as well, I was treated to a magnificent view of the magic of God's work. As the sun came up over the horizon the seagulls came in and wandered around the beach.  They also took flight into our photos to create an even better shot than anticipated.

I have to say that the view of the sun rising made every minute of early rising better than I expected.