A moment frozen in time

*** I apologize for missing the last post.  For some reason this post did not go up as scheduled. ***

As my wife and I were driving home from the store tonight we were witnesses to a very serious accident.  We were following behind a white pickup and suddenly I saw two pairs of headlights swerving into our lane and headed toward the white pickup as it tried, in vain, to avoid them.  Scant moments later the three collided with a resounding noise, and came to a stop on our side of the intersection we had been approaching. 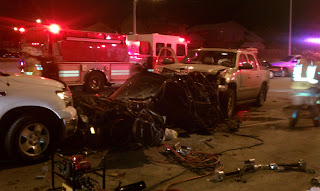 I jumped out and proceeded to assist as needed and the wife started praying for everyone involved.  The white truck had a father and two children who were, thankfully, all fine.  The silver pickup shown to the right of the picture had an older couple who were a little stunned but seemed to be fine.

As I ran past the little black car in the middle I could hear someone moaning but couldn't see through the tint on the windows.  After we made sure that the people in the silver truck were okay, several of us began to try to get to the occupant of the middle car.  I left them to try that as I called in the accident, and all they could do was pull out the drivers side window and do their best to check the young man who had been driving. 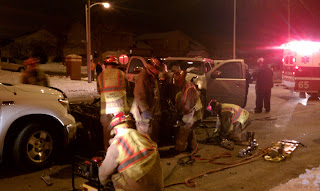 I am sure that he was badly injured from what we could see since his left leg was on the windowsill and his body had slid down the drivers seat.  He lost consciousness while we waited for the emergency team to arrive, but stayed breathing.  Once the fire department arrived they had to pry the door off because the car had been so compacted by the force of the two truck colliding. They ended up calling in the helicopter to get him to the hospital as fast as possible.

Now that we have come home and had time for the adrenaline to work it's way out of our systems, we are a little drained and shocked at what happened in front of us.  The scary part I thought about later was had the truck been able to avoid the two oncoming vehicles, we would have been the next in line to hit them, and we were not in my truck but the wife's little SUV.

The most recent news I have on this is found here.

We are still praying for the young man and hope that everything works out all right for him.

Amazing how life can take a twist when you least expect it. Please be careful out there, someone will miss you, and you make a difference to someone.

Were both the black car and the sivler truck going the wrong way. Did you learn what casued the accident. And what is the update on the driver. My PC won't let me follow the link. So very glad you and wife are fine albite shaken.

The teenage driver driving the car is hospitalized and in critical condition at this time.