My boss is an interesting fellow.  With all the things in the world that you can collect, he collects pictures of state capital buildings.  While he was the one traveling he took pictures of all the buildings when he visited the capital, but now that he is stuck in the office the duty falls to me.  Which means that when I recently went to Madison, Wisconsin I had to make sure that I took a picture for him to put in the collection. 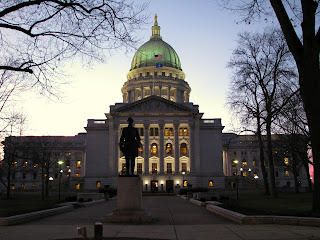 So I wondered down to the capital building after we finished work that day and tried to get pictures in teh best light possible.  Being as it was winter and days are short I had to settle for a few twilight shots and then some night shots.  Thankfully my camera isn't too bad at twilight and there was just enough time to get good shot like you see the right.

As a matter of fact, just as I came to this side of the building the lights came on and I was treated to this incredible contrast in color and darkness. 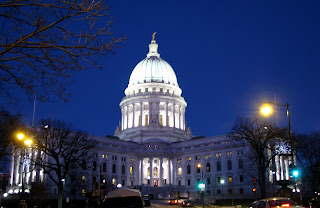 The night time shots were a lot rougher.  The building is shaped like an "X" and it is pretty tight up against the buildings surrounding it.  To get the night shot you see to the left I had to walk down a side street half a block, walk out into the street and shoot the building with a camera that does not focus well in low light levels.  Thankfully the lighting on the dome really does a great job of selling the shot because the rest was just tough to get.

One side note about this shot is that I was by a church that also has a food line for the homeless and they were all lined up on the sidewalk by where I was taking this shot.  As I started back up the street to keep walking around the capital building I hear behind me "Hey!  Were you looking to me?  What are you looking at?  Come back here, right now!  Hey You!" and the voice was following me.  Needless to say I was walking with a little more determination and speed as I headed back into the square with the security and safety of the capital complex.  Thankfully, no one followed me and nothing more happened, but it was a moment with a story.

And sometimes that is what makes the pictures that much better.