Good morning!  Our trip today takes us back to the "hub" in the Magic Kingdom for a picture that truly displays the changes in the park over 40 years. 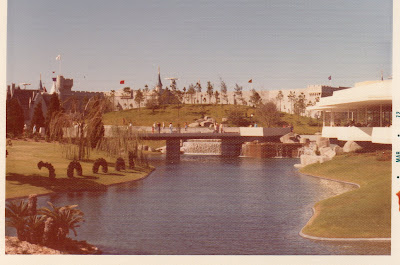 As you can see to the right we are looking from the bridge to Tomorrowland.  The first thing people seem to notice in the picture is the mysterious castle wall in the background.  We are looking across the lagoon and we can see the serpent topiary, and the bridge to Tomorrowland that also leads into Mickey's Toontown.  To the right is Cosmic Ray's and Auntie Gravy's restaurant. But what has changed since then? 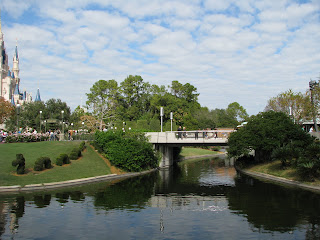 I took this from the pathway that leads from the ice cream parlor through the Tomorrowland Terrace and into Tomorrowland instead of from the same bridge because of some changes that have been made that I wanted to include in the shot.  In my shot you can see the bridge from which the original picture was taken, but amazingly, the serpent is here as well.  Disney has added a new pathway between the two bridges and moved the Serpent as part of that process.  Not only has the serpent been moved, but he also started swimming in the opposite direction. :D 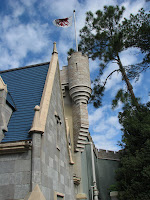 Regarding that castle wall, If you look closely, you will find that the wall is the BACK of the Fantasyland area.  In the past 40 years the trees have grown up nicely and provided a shady area to walk from Fantasyland to Tomorrowland and the wall have become hidden behind those trees.  For a better idea of how that wall has been hidden I took this picture of the the rear wall of Fantasyland with the cupola that is visible at the far right of the original picture.  As you can see the original wall is still there, but the trees have blocked the view of the amazing detail that is put into this park.


I want to thank all the people that took the time to read through the series, and the Cast Members at Magic Kingdom for the all assistance I received with the project.  Especially the two young ladies at the City Hall who helped me mark out on a map where all the shots were taken.  I only wish I had remembered to write your names down so I could credit you properly for your assistance. (Update: One of them commented below so I can now say publicly "Thanks Katey!") 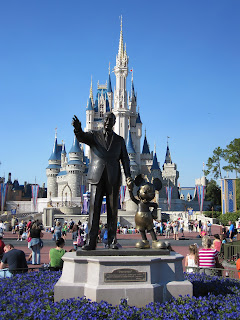 I will leave you with a picture from my previous trip that is, to me, the symbol of the entire Walt Disney World property. Let this be the last post for the year, and a symbol of the possibilities of the new year.

I just checked out your entries for he Disney "look back at 40" and love them! And thanks for the shout out! The photos all turned out amazingly and I'm so glad that I was able to help out! Keep it up!

@Katey - I only wish there had been more time and more pictures. We are working on finding more pictures in the various family photos caches. You and your fellow CM made the project so much easier. The wife and I took a look at your blog and you have some great info there about being a CM. Thanks again for all your help!