View from the Rock

If you have ever been to NYC, or even seen movies about the borough of Manhattan then you have encountered 30 Rockefeller Center, the home of NBC.

The skating rink with the golden Prometheus... 30 Rock 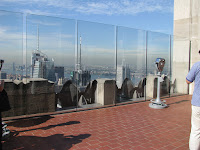 Turns out there is one heck of a
observation platform at the top of the main building in the complex.  Called the Top of the Rock,  it is two levels of glass walls that give you a view of the entire city like know other.  I have been to the viewing level of the Empire State Building (ESB), and also the mooring level of the same.  The view is good, but noting like the view from Top of the Rock.  TotR has glass walls so you don't get the wind, but your view isn't hampered, and you don't have to have to look through a chain link fence.

The cost is minimal, and you aren't going to spend all day waiting to get the top while also having to go through the indignity of TSA security like ESB.  As a plus, you have an clear view of the north and south end of the island as well the the other boroughs as well.