No, this is not some new team playing in San Diego, this is all about he sea lion population in San Diego.  The Mrs. and I took a trip on the SEALs while we were in San Diego last year. (Same time frame as the Comic-Con post).  This was a great ride and we saw some incredible sites from both the water and the land.  We were also privy to the conversation of the gentleman behind us who apparently thought it necessary to impress the young lady with him and make up information as we are moving around town.  Our favorite was the one where we were floating past the Navy aircraft repair station and this gentleman leans over and tells his girlfriend, in a conspiratory tone, "Too bad they don't fly on Sundays." Not 2 minutes later we hear the roar of not one but 4 F-18s taking off from the station and flying out to sea. 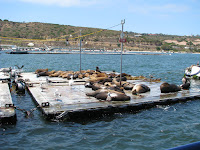 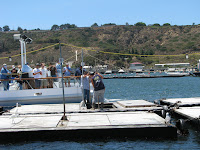 But I digress.  The most interesting natural site we encountered was when we pulled up to the floating bait boxes in the bay.  There are several companies that have large containers chained together and floating in the water.  These containers have live bait fish in them for the local fishermen and charter boats to use for thier operations.  These containers look like a platform to stand on, but apparently the sea lions feel they are perfect for sunning themselves as well. 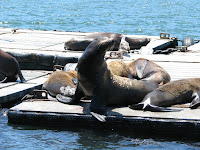 Now there seems to be no lack of sea lions in the San Diego area, and they have certainly found themselves a place that is out of the way.  But they also seemed to be pretty comfortable with the boats coming up close to the containers.  We had one particular sea lion who was posing constantly and never stopped while we were in the area.

Take some time out of your busy schedule and take a ride on the SEALs while you are in San Diego.  One word of caution for you though.  Dress warm the breeze out on the water is pretty chilly even on the warmest days.