The other happiest place...

My first visit to DisneyWorld was in 1972, the year they opened. I have family that live in Florida and have been back to DW a lot since then. I love the place, and just never seem to get my fill of it.
There is truly a special feeling about the place and I have never really had a bad experience. The cast members are cheerful, and always willing to stop and talk with you. I love that you can spend days in one park, and still go spend the next in a totally different park with a totally different look and feel, and yet it will still be done with a level of excellence that I don't see anywhere else.

That is until I finally made it out to DisneyLand.

Now I know two places that make everything you see seem so incredible that you just come away with the thought that maybe you really did spend the entire day in another world where animals talk and everyone is happy (except that grumpy old goat that was dragged there by his family).I mean

where else in the world can you be greeted by a giant mouse...
take an undersea journey... 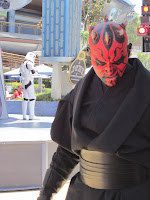 or come face to face with a Sith Lord?

And that is just DisneyLand!
In 2001 they added a new park across from DisneyLand that was themed for California called, what else, Disney California Adventure. The park is broken up into different areas, each themed for a different part of California. The E-ticket items were California Screamin roller coaster (couldn't ride this enough), Grizzly River Run, and Toy Story Mania!.
There is so much to do there and at the end of the day you can enjoy what is probably one of the best shoes I have ever seen... Disney's World of Color. The technology they put into this show is incredible. 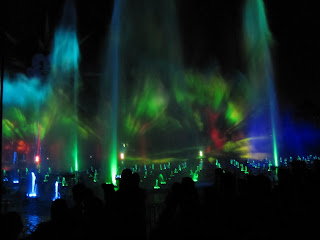 Imagine projection screens made of giant fans of water, columns of water of all the colors of the rainbow, fireworks, incredible music, and fire all in one. 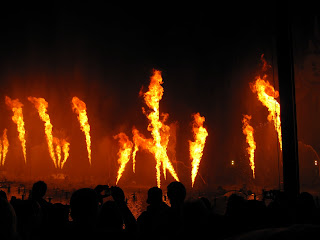