Windows can be a wonderful OS, sometimes...

So I was looking for a topic to this post, and digging through old pictures that needed to be sorted. I found one that leaped from my hard drive and screamed "Pick Me!"

Not too long in the past my wife and I were a a former employers Christmas party in a downtown hotel, and I noticed that all along the outside of the ballroom were little blurbs about historical locations in the Omaha area that are no longer there. Along with the text as a digital picture of the location. Very cool, especially for someone like me that likes to see the history of everything.

So I decide to wander along in the hallway and read each of them (my wife hates going anywhere that there is a lot to read, as I will read all of it) to see what they have for us. May of them had not just one picture but many pictures that are rotated on the little screen. So it made for a entertaining read at each of the displays. 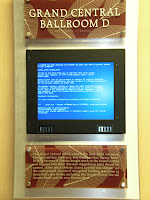 Then I found the most entertaining of all...

The computer managing the graphics is apparently a Windows based computer and it had suffered the most tragic and, sadly, final a Windows system can go through... the dreaded Blue Screen of Death (also know as the BSOD). Generally the error message you get is about as helpful as a deep freezer in the arctic. However, the messages are always recognized by any IT tech instantly, usually followed closely there after by a loud exclamation of pain and despair, and the raising of hands to the heavens above.

To truly understand the cryptic nature of the message and the reason for the anguish we tech feel, take a look at the somewhat blurry close-up I took of the screen. I do apologize for the clarity issue, but it is hard to focus a digital camera that close, at least it was with that camera. 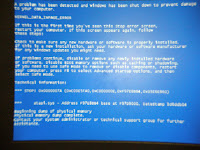