You know all those hilarious pictures that you see on the web about someone getting pranked in some outrageous way, and you think "There is no way that really happened!"? Let me show you one that I know personally. 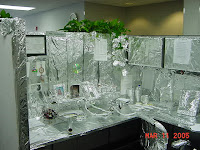 A while back a buddy of mine went on vacation and his associates at work decided it was time to get him back for all the jokes and pranks he pulls in the office. It's not that he is obnoxious or anything, he just makes it fun there and it was time for them to get even. 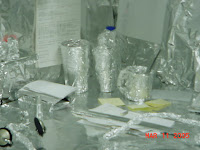 So while he was away they took advantage of his week away and redecorated his cubicle in a more dazzling fashion. He comes home and when he comes into the office he sees the most incredible prank he has ever seen. As you can see from the photo to the left, they missed no details in wrapping his desk in foil. He told me that it took him several days to uncover his desk.
--TT
Posted by Malikont at 2:01 AM