Back to one of the top zoos in the country...

This time around we take a quick trip into the aquarium to see the penguins, sharks, and jellyfish.

The aquarium has so many features, but I will focus on just a select few, mostly because I don't have pics of the rest. ;)

First up is the penguin display. This place is amazing, and the penguins never fail to impress. The zoo has built a climate controlled environment with contoured surface and "hills" for them to climb, snow falling all day long, and a pool for swimming, all while having a great view of the crazy humans that come to entertain them all day long. 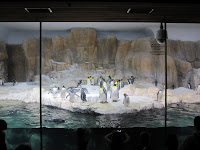 The humans stack up on several tiers so the 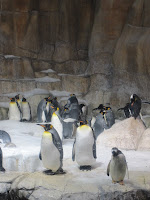 penguins can see them better, and there is even a rail not far from the glass to allow the human children room to come up closer without the adults getting in the way. The glass is floor to ceiling and even during a leisurely swim they can see the humans on display. The keepers have even installed microphone in the enclosure to allow the penguins to serenade the humans with their lovely voices. The humans seem to enjoy hearing the conversations while being watched by the penguins.

There is also a live webcam for you to control and watch the penguins any time you wish. You can see the webcam hanging from the ceiling in the picture above.

After leaving the penguin display you go through displays of various fish and plants found in the oceans. Yes, the clownfish are there and the children as all yelling that they found Nemo. One section that I found particularly interesting is the smulated tidal pool. This displa is all about what you might see in a south pacific beach, but from a side view, including regular wave action.

through the 900,000 gallon salt water aquarium featuring sharks, turtles, and other ocean dwelling creatures. The grace of a turtle floating through the water without effort relaxes you and brings a moment of serenity. 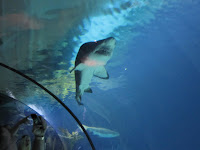 The greatest moment is when you are standing in the tunnel and a fierce tiger shark swims directly over your head with his jaws open, teeth gleeming in the light. You can easily imagine that he has only spared you from becoming his dinner because you are not worthy of his time and effort. 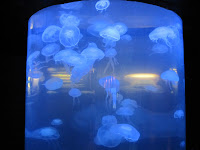 Leaving the tunnel you now face more displays including the incredible display of jellyfish. floating in a clear column of water, lit by black lights (who knew they weren't just for posters?) the jellyfish seem so fragile and angelic. 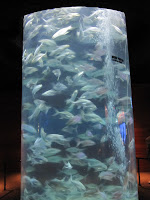 Just in front of the jellyfish you find another column, this one has a large school of Round Pompano whose silvery scales gleam in the white lights shining down into the column tank.

This concludes the tour through the Scott Aquarium, but not the tour of the Omaha Henry Doorly Zoo. Look for more in upcoming posts in the near future on this great place to visit in Omaha.

The end of an era

Let's take a quick break from the zoo for something else. 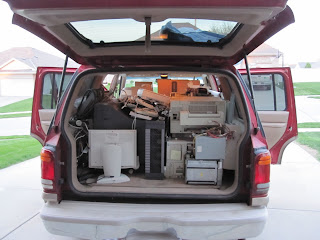 A few weeks ago a local company had a free electronics recycling day, and I felt it was time to get rid of a few things. I have been a bit of a pack rat when it comes to computer equipment and so I had lots to take to them. As you can see from the picture of my vehicle about 90% of the way through the loading process I have a LOT of gear to give away.

As you can see I have monitors, printers, serves, mounting kits, storage devices, and even an old TV. After this picture was taken found even more equipment in my garage and proceeded to fill it to the top and also filled the passenger seat as well. By the time I was done with the first load I found that I actually needed to make a second trip for additional monitors and servers I had in the basement as well.

I mourn the passing of that age where I would happily aquire new equipment and build servers in the basement to fuel my passion for learning more about networking and software systems. Now I find that virtualization has quickly shrank the size of my "data center" and , thankfully, my electric bill as well.

"Nothing endures but change" -- Heraclitus

Posted by Malikont at 2:01 AM No comments:

I actually spent some time in town recently and we went to the Omaha Henry Doorly Zoo. Ranked as one of the top 5 zoos in the US, it is one of my favorite places to visit when I have time because of the quality of displays and attention to detail in the care of the animals and exhibits.For the first post on this location, we journey into the Butterfly house. 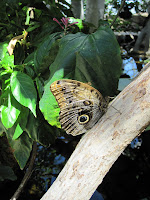 To enter this building you have to go through a dead-man door system. They are very careful to keep the butterflies in the display area so you have to enter the room, and once you are read the rules, they will open the other door and you can now wander through the tropical forest on a premarked path and see butterflies freely fluttering around you. You are allowed to look, but they ask you not to touch. but it is not unknown for a butterfly to decide it would like to land on you for a better look.

To the right was the first butterfly we saw, and although the colors are muted, the whole of the patterns just tells you how beautiful nature can truly be. 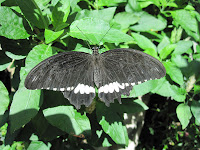 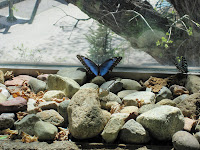 However, for those who think of brilliant colors and patterns I give you a picture with both color and flash, as well as one that demonstrates the stark beauty in contrasts

Sometimes you actually see an additional resident of the Butterfly House that is winged but not an insect, the little hummingbirds. 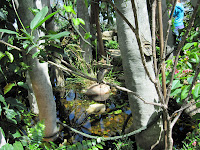 The little birds can be seen buzzing around visiting the various flowers in the area, and landing for just a moment on a branch. Trust me, it is no small feat to capture them on camera. 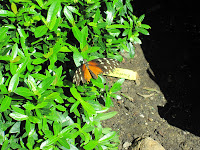 Finally, my last picture from our trip is a lovely ragged wing butterfly. No, not a victim of attacks from wild children or vicious rival gangs of wild butterflies, this insect is truly shaped like this all the time.

Future posts will take us to the penguin display and also to the open air aviary. See you soon!

I discovered that I can schedule posts to be published in the future so that I don't have to do it for myself, and I am working on a buffer to allow for a continuous flow of blogs. Consistency is my goal.

With that being said, for the time being I will be posting every Monday, Wednesday, and Friday.

Here's hoping I can make this a worthwhile effort and not bore you too much.

Everywhere else is okay...

I was once again working in Fargo recently and as I visited a local restaurant I saw the following signs... 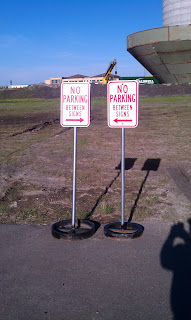 I just have to wonder what they are thinking will try to park there.
Posted by Malikont at 10:44 AM No comments: