I was walking through the grocery store this evening and what is it I am about to leave? A grocery cart filled with a gamers primary food source.

If I had been able to get Slim Jim's at .50 a piece back when I was gaming all the time, I would have killed for this cart!
Just the thought of all those preservatives gives me the shudders.

I am always looking for the ironic in life. Sometimes it's a phrase, sometimes it is someone's actions, but most often it is a sign that just goes against the thing it is talking about.

Here is a great example. I was walking back to my hotel a while back and saw the following sign on a door for a dumpster shelter. It has a slide bolt to allow the door to be held open or closed. If you have ever had to take trash out to one of these you can certainly understand the desire for one of these.

Then why put a hole in the ground for me to lock it open? After all, the sign tells me not to open the door, right?

So I was getting breakfast the other day and saw the following: 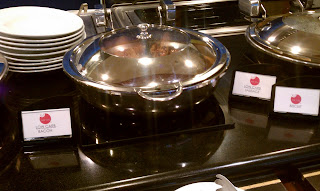 (click on the picture to see the signs clearly)

Isn't meat pretty much low carb any way? I thought it was protein. Unless they have been adding something to it, in which case this is simply saying "We have stopped adding a little something to your meat". I like to think that some marketing person thought it was a great way to promote a dish on the buffet line that already costs you $18.00(US) to eat from it.

I have been traveling a lot the past few weeks, and I am probably going to be traveling just as much in the future.

However, It has only been recently that I have been forced to fly on Delta Airlines. My prior trips were on United, Continental (now part of United), or Southwest airlines. U and C have their issues, but I can pretty much always count on getting where I want to go when I am supposed to be there, barring any weather issues.

When flying Delta, I can pretty much count on a delay, and may have to have them reschedule me onto a later flight. I have made 8 trips (each with 2 flights to get wherever I am going) and usually one of the flights in each trip is delayed. The interesting part is that I usually find out when I get to the airport to checkin that a flight is delayed.

The real humour here is that Delta has ad campaign going that states that being a big airline doesn't mean that a bad airline. Come again? Have you flown your own flights?

The other issue with Delta is that most of their flight attendants are not the happiest people in the air. I realize that their job is not a position where you are dealing with happy, friendly people all day long, but I usually find that the staff on other airlines are much more friendly. How sad.

I also have noticed that they have started charging for luggage as well. I realize that other airlines are charging these as well, but if you are dealing with image issues, the last thing you want to do, then you really don't want to start raising rates on the same people you are trying to convince to travel with you.

I do have to say that they have been offering a free snack, and that is something that no one else is giving lately. The brand is Biscoff, and it is a tasty cookie with brown sugar in it. Not exactly on my diet, but when you are several thousand feet in the air, you can't be too picky.

At least that is something.
Posted by Malikont at 7:55 PM No comments: